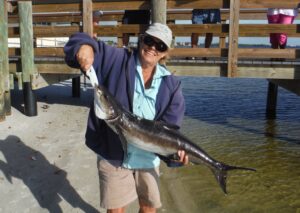 In our continuing search for great fishing away from the troublesome and persistent red tide, we decided to go to the Charlotte Harbor area with a bucket of live shrimp and hit some of our favorite piers. We took two dozen shrimp and only had a short time to fish, so we stayed at each spot for an hour or so.

We started at the Bay Shore piers. It was low tide and very windy. There were lots of anglers on the pier looking for a break from the wind, but unfortunately, the northwest wind forecast turned into a west wind making for a chilly stop and nothing was biting.

Our next stop was the Laishley Pier in Punta Gorda. We like this pier on an incoming tide and west wind. The rip rap pile east of the pier usually holds trout and snapper so the wind and tide help get the offering out to them. Today though we couldn’t give away a shrimp to any fish and so we left after an hour. Other anglers had the same luck but one did manage a stingray. Hey, anything beats a zero.

From there we went back across the 41 bridge to Port Charlotte to fish and check out the kayak launch at the new Live Oak Point park at the north end of the bridge. The tide was coming in by then and we fished where the current was creating a sand plume next to shore hoping to find a black drum. Les only managed to catch a hard head catfish. So, we left there with three locations and little to show for our efforts. We still had plenty of shrimp and daylight so we headed to the pier at Port Charlotte Beach.

We haven’t been there for a while but in the past had caught trout from the pier and from kayaks. There is a deep grass flat off the south end of the pier. The wind was slacking off, the tide was moving and the water was clear. Kimball rigged a popping cork on 10-pound braid line with 20-pound fluorocarbon leader and a 1/0 octopus hook with a small shrimp. She immediately hooked a large snook that knew exactly what to do by going around a pier piling. That excitement lasted only a few seconds. After re-rigging, she hooked up with a hard head catfish. She had time for a quick release and one more cast before our parking permit expired [expensive overtime ticket…don’t be late].

A powerful strike and long run, at first, suggested a big jack crevalle. After ripping off 50 yards of line, the fish started to circle to the right with another strong run. Our first glimpse of the dorsal fin and tail was definitive of a cobia and a big one at that. A cobia must be 33” long to keep and this one looked to be a keeper. After a couple of more good runs, it swam closer to the pier and the barnacle encrusted pilings. By then, a good crowd had gathered, convinced it was a shark, having never heard of a cobia before. Every time the fish approached the pier we had everyone bang on the rail and stomp on the deck causing the fish to head away again.

Kimball finally beached the fish at the end of the pier after a 30-minute battle. A careful measurement confirmed it was a keeper. We often release fish but a cobia is a rare catch and a favorite of ours, so this one came home. We gutted it, cut it into one inch thick steaks leaving the skin on and then grilled one fresh steak with a mayonnaise glaze seasoned with a little Cajun spice. A hot grill will quickly brown the surface but please DO NOT overcook. The rest of the steaks were packaged and put in the freezer. One taste and we bet you too will find this a favorite. Other names for cobia include ling and lemon fish. 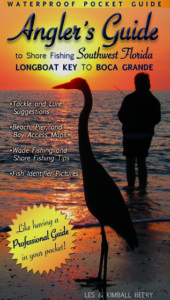