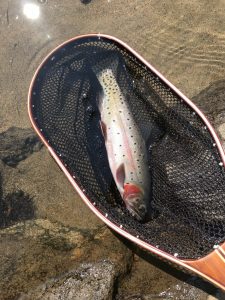 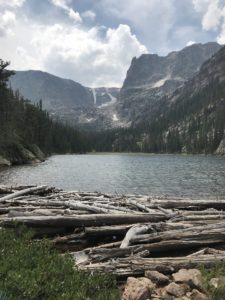 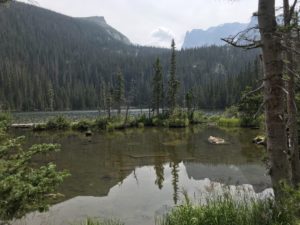 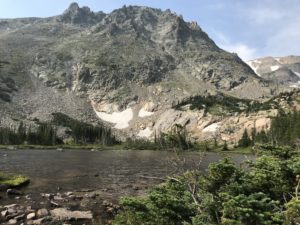 Yesterday Kimball hiked to Odessa and Fern Lakes starting at Bear Lake. It was a beautiful early morning hike and the views were spectacular from the cliffs overlooking Odessa. The hike was strenuous (10.5 miles) but well worth the effort for the opportunity to catch and release beautiful greenback cutthroat trout in these lakes. Few fish were cruising the shallows in Odessa, so after no luck with the fly rod she changed to the spinning rod rigged with a fly and bubble. The fish were rising far out into the lake and she was able to reach them with this rig. Several 13″ fish and a few smaller ones were caught on a parachute Adams and one larger fish broke the tippet while using a green woolly bugger.

While at Odessa, Kimball met some young boys trying to fish with lures with no results. She educated them on the fly and bubble technique and later met them at Fern and let them use her spinning rod to try their luck. They all got several strikes but the youngest boy caught his first fish EVER!

At Fern Lake the fly rod worked well casting a flying ant just past the drop off, fished from the grassy area on the east side of the lake. The fly and bubble fished far out into the lake and rigged with a parachute Adams, got a strike and a fish on almost every cast. They would first hit the bubble as it landed in the lake, then they’d go for the fly. The greenbacks in Fern were smaller than the ones in Odessa.

The long, steep, rocky down hill hike out to the trailhead was tough on the feet and knees. The mile walk from the trailhead to the shuttle bus stop was a killer at the end of a long day, and it didn’t help that the mosquitoes came out in full force right then.

It was a beautiful and fun day!