Yesterday, I fished The Loch in Rocky Mountain National Park. Due to the issue of limited parking, I arrived at the Glacier Gorge parking lot at 6:30 AM and to my surprise found a parking space! It was a beautiful, cloudless blue-sky day. The only issue I encountered, weather-wise, was strong gusty winds all day. The wind was blowing from the southwest straight into all directions for casting a fly. There were a lot of big snow drifts at the lake which required going up and around or climbing over the smaller ones.

Fishing was really slow! I saw maybe 5 fish all day, hooked one with an early release, had refusals several times and one fish in the inlet stream seemed to be blind. He went for my fly a half a dozen times, missed each time and finally gave up. I tried many different flies including a prince nymph, beaded pink San Juan worm, flying ant and parachute ant, but the one that I finally hooked a fish on was my go-to fly, a parachute Adams.

Besides being almost blown off into the ice-cold water while fishing off the big rock on the west shore, the main bummer of the day was breaking my fly rod. Thankfully it happened near the end of the day. The knot that connects the leader to the fly line hooked on one of the eyes as I was pulling the fly line out so that I could change out the leader. I tried fixing it with a stick wrapped on with tippet line. That didn’t work very well and instead of a straight rod it was kind of bent! Ha! I’m thankful that it wasn’t an expensive Sage rod! 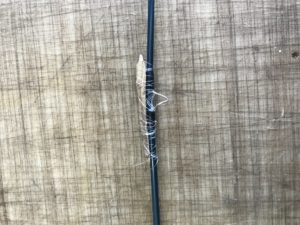 That ended fishing for the day. I walked the trail back by Alberta Falls just to see the tremendous amount of water cascading over the falls as all of this snow melts. 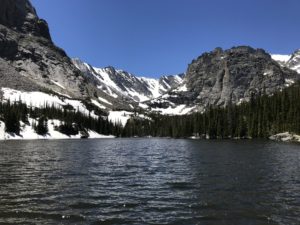