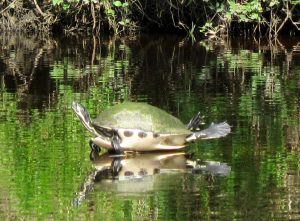 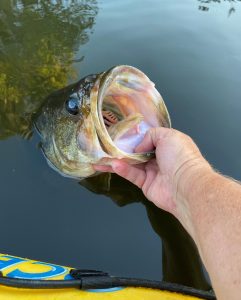 Folks that appreciate the outdoors and wild things know that silence is golden. Hunters need to be stealthy to harvest game. How quiet depends on their choice of weapon. Bow hunters have to get closer than the guy with a scope. Kayak anglers can get close to feeding gamefish on shallow flats and tiny freshwater creeks. But that advantage disappears without stealth.

Stealth in a kayak starts with having a clear deck and a way to secure your rod and reel while positioning the kayak. Nothing puts a fish off like a reel falling onto the deck of a kayak; it sounds like a bomb going off underwater. Of course, a close second is banging the kayak with your paddle. Everybody can avoid making noise like this and one thing that helps is a damp towel on the deck where stuff usually falls. Our kayaks have a cup holder for a cold beverage, and we always use a foam insulating holder to quiet the can and keep it cool.

Paddling is another surefire way to spook fish. On a glass smooth shallow flat at sunrise, it can be a challenge to approach a feeding fish without making any sound. Paddles that bangs into an oyster bar or crunch a sandy spot sound the alarm underwater, so fish tend to stay a cast and a half away as you approach. There can be times when the water is too shallow to put the blade completely into the water. This gives you the choice of either “poling” or “splashing” with the paddle, either one creates a lot of commotion. In this situation, the best plan is an unadjusted drift that gets you into casting range or wading.

Even in deep water, noisy paddling can spook fish. The trick is to get the entire blade of the paddle in the water before taking a stroke. And don’t get too energetic even then. A powerful paddle stroke creates pressure waves and whirlpools you can see, and fish can feel. When lifting the paddle pause a moment while water drips off the blade close to the surface. Tiny stuff like this can make the difference between hooking a big smart fish or a little dumb one. If you adjust your position and need to put on the brakes when you get there, you used too much force. The commotion of stopping a kayak for a cast can put a feeding fish down.

So, you’re positioned for the perfect cast, but the target keeps moving away. It’s those darn pressure waves again. When kayaks rock side to side, waves are created as when paddling or casting. Learn to cast [fly or spinner] without rocking the boat. If you can see waves going out from the kayak, you’re telegraphing your location and size to the fish. Notice that hardly any pressure waves start at the bow and go forward so targeting fish ahead of the kayak lets you get closer. Stealth matters less on a choppy flat or windy lake than on a tiny, silent creek where nothing moves.

One thing that both boat anglers and kayak folks have to contend with is hull slap from waves. Flats boats feature hull designs minimizing slap. Kayaks can slap too, but it’s often avoidable with the proper load and profile. Our old Ocean Kayak Drifters™ are designed as super stable work horses that can carry450 lbs. Since neither of us is that heavy, our kayaks float higher than designed, making them susceptible to slap. Try to match the kayak to your normal load for minimal hull slap.

No one can fish from a kayak without making some noise. We hope these picky details will help kayak anglers of every skill level approach and catch more quality fish in quiet water. Just learn to be still and remember… stealth is not a color.